its name is my name

A few nights ago I was Googling my name which is, you know, the best possible use of my time. I found this: 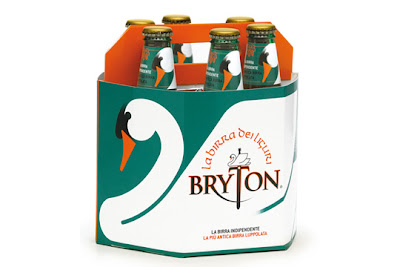 It's a beer, an ale to be precise, named after me! How is this possible?

It's an Italian beer, and here's the story: so you've got these people called the Ligures or the Liguri, who lived in a land called Liguria, which is now Tuscany and a little bit of Southern France, Bavaria, and other dark and woodsy places. They were a barbarian people and were eventually soaked up by the Gauls and then the Romans. You know how that goes.

In a cup in a tomb of a Liguri king, they found traces of ale, and this beer is an attempt to recreate that recipe. Why is it called Bryton? Because that's what the Liguri called this beverage.

I've often wondered about the origin of my name, and though I don't think it's what my parents had in mind, guess it turns out I'm named after the world's oldest beer.

Seems like if there's a beer named after me, or vice versa or whatever, I should taste it. Very least, I should have a bottle to add to my collection of beer bottles (yes I collect beer bottles, which is one of the many things I may have to give up some day if I ever want to stop being a man-child). So I wrote to them to see if how I could possibly get my hands on some and they responded -

Dear Mr Bryton…I understand and appreciate your desire to taste the Bryton beer, the oldest beer in the world to have been brewed with flavorful hop. But without a US distributor it will not be easy to ship it over to you. This could then be a chance for you to make a good deal and become the US distributor of Bryton Beer.

I'm considering it. Might be hard work though and I don't really like filling out paperwork so probably not. But who knows? Maybe I could be the next great beer baron, like that tool in the Sam Adams commercials.

On the other hand, by becoming a distributor I might become associated with this guy, and I'm not sure that's something I want. 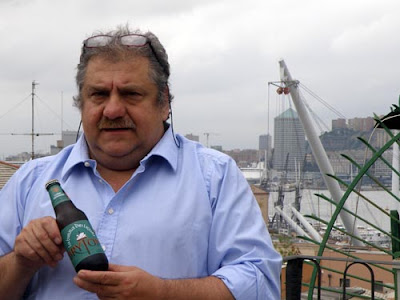 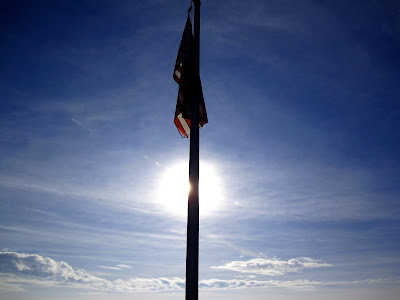 Let's go back out into the wasteland, eh? If you've been reading this blog for a while you've seen (and no doubt enjoyed) some of my "Adventure Days," little road trips I, along with various crew members, like to take to weird, interesting, historic, abandoned, etc. places within relatively close driving distance of the home office in Salt Lake. A region I've spent a lot of time in is the West Desert and Great Basin area to the Southwest of where I am right now. When I say "spent a lot of time" I mean, "have been out there three or four times." Nevertheless, I feel like if you needed a guide for an adventure of your own there's no one better than me.

On a recent Saturday I sure as heck needed to get away, and though I can't speak for my traveling companion Elin, I would have to assume she needed to get away as well. I was feeling antsy, the air in the valley had been unbreathable, I needed a reason to update this blog again, and some dudes were looking to wail on me so a road trip seemed prudent. We decided to go the Eureka-Delta route and see what we could see.

Eureka has been blogged about here before. We breezed right through it this time but I turned around and went to gasoline because I would have been really embarrassed if we ran out of gas in the middle of nowhere. This gas station is also a motel, but I kept poking around inside and couldn't figure out where the motel part of it would be. 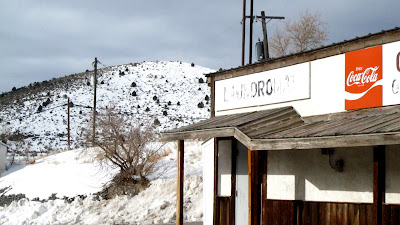 The road from Santaquin (which is just off the main stretch) to Delta (nowhere near any sort of stretch) is a long one dotted with small loosely organized communities, tipped over sheds, and swampy woodland areas with dead twisted trees, beautiful in their astounding ugliness. Delta is an oasis, such as it is, floating out there in the desert. It exists mostly for it's noteworthy Alfalfa and concentrated Berilium.

We got into town and just bumped around a bit. We were on our way down one road when a barking dog chasing after two barking dogs in a truck changed our course. 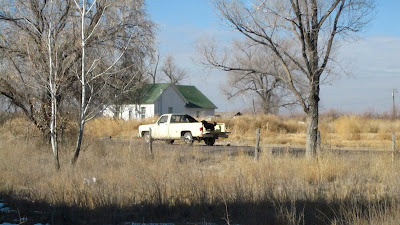 When you're in small town and you see a goofy little dog chasing after two goofy big dogs, and those big dogs are in a slow moving pick-up, it's best to stop whatever you're doing and follow that scene. Because maybe that little dog is leading you to something interesting? Like this! 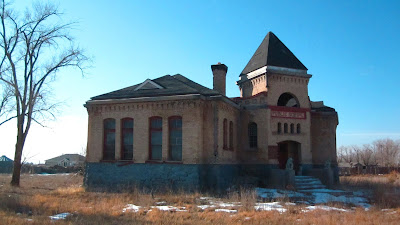 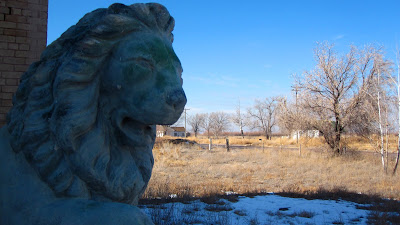 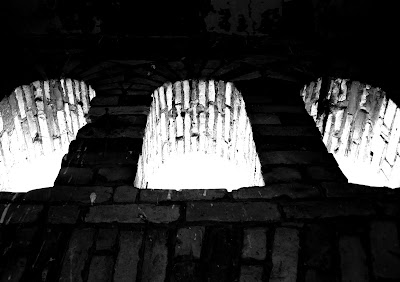 It's normal for a school to have a toilet, but there was also a bathtub in their. It was filled with dirt. 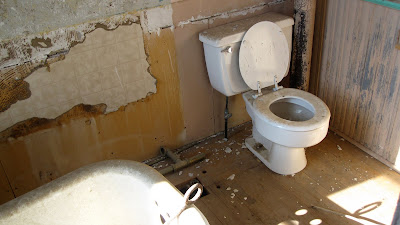 Check out this awesome revolutionary wallpaper. Everything you need to know, right there. 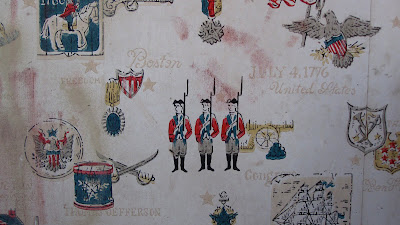 The floorboards were creaky and covered in tetanus bearing nails, and there were dead birds everywhere. Not the most inviting of environments.

A ways out of town, down a lonely dirt road is an interesting site. It's guarded by this message on a rock, maybe a thousand years old. They think the message is from one tribe giving another tribe permission to hunt (on Tuesdays, Thursdays, and every other Wednesday) 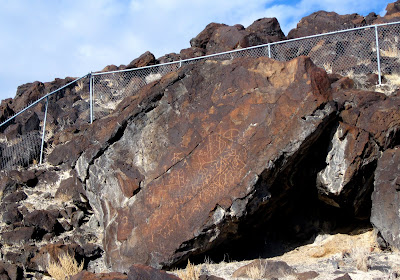 Hiking! We headed up a mountain to get a look at a weird rock. The vastness of the scenery below was hard to comprehend. Aside from that poor excuse for a road there were no signs of human life, literally as far as the eye could see. 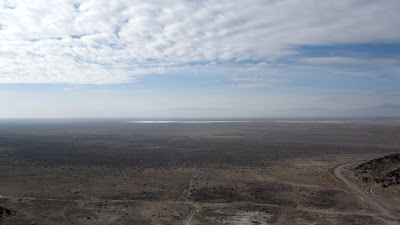 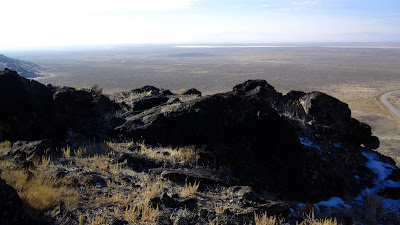 This here, is a big pile of rocks. 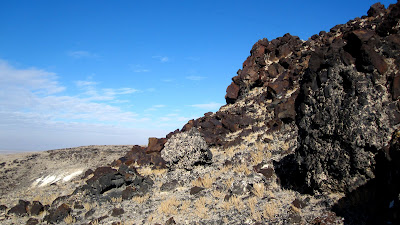 I'm just trying to give you a sense of atmosphere. 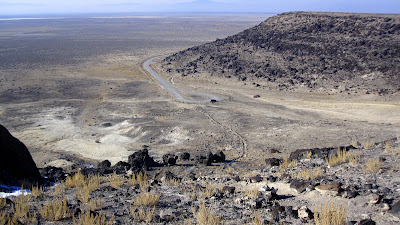 So get a load of this rock. It's called, appropriately, the Great Stone Face. 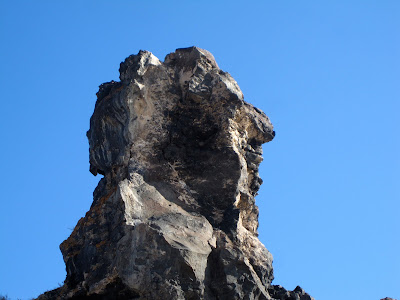 Whaaa! It looks exactly like Joseph Smith, the inventor of Utah! 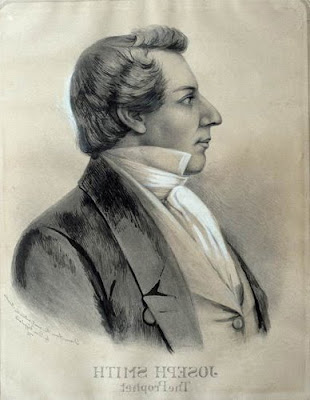 The face was found by Mormon pioneers exploring the area in the 1800s. You can imagine their surprise. Got to admit, the resemblance is striking. I'd imagine that the Native cultures of centuries ago held a certain reverence for the rock as well.

So! Let's shift gears a little bit. Imagine you're just chillin' in the country you call home. You were born there and you've carved out a little niche for yourself and in your free time maybe you just like riding your bike around and playing baseball. Then the country your parents were born in go and bomb your new country, and you're like "Not cool, dudes!" but no one cares for your not-cool sentiments and they figure, well, despite your Schwinn and your baseball glove you're probably no different from the guys that bombed us. Why don't you come with us, they say. And then they put you on a truck and put you on a train and put you on a truck and drop you off in the Topaz Internment Camp. 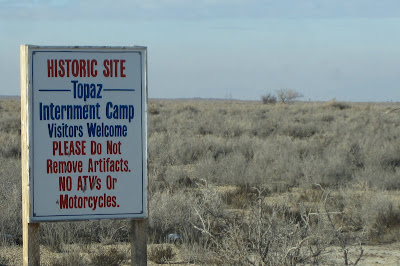 Where the scenery is flat, the summers are hot and the winters are cold, and you're behind tall barbed wire fences watched by guards with machine guns. Kind of a bum deal yeah?

Topaz War Relocation Center covered 31 square miles and housed about 9000 Japanese and Japanese-Americans during WWII. An interesting tidbit from Wikipedia about the name:
Topaz was originally known as the Central Utah Relocation Center, but this name was abandoned when administrators realized that the acronym was naturally pronounced "Curse." The camp was then briefly named for the closest settlement, until nearby Mormon residents (with their own heritage of forced relocation) demanded that their town name not be associated with a "prison for the innocent." The final name, Topaz, came from a mountain which overlooks the camp from 9 miles (14.5 km) away.

The 442nd RCT of the 100th Battalion was a military unit made up entirely of Japanese-Americans and became the most highly decorated combat unit in the history of the U.S. Army. Many of the boys in the unit returned from the war and were sent straight back to Topaz. WTF?

There's not much of anything left out there, but the stillness of the air and the disinterested landscape gives off a real eerie feeling. 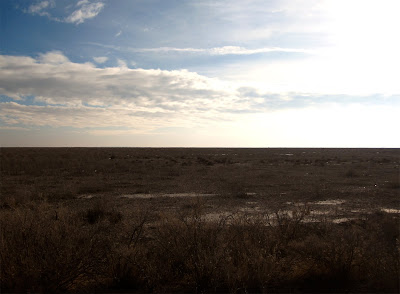 Don't try to step on those holes, you'll fall. 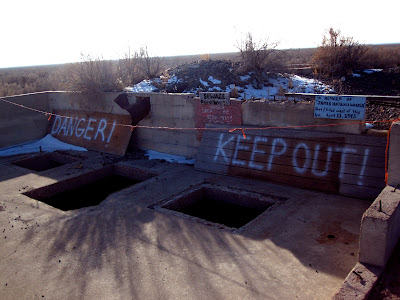 Shot and killed by the guards for standing too close to a fence. 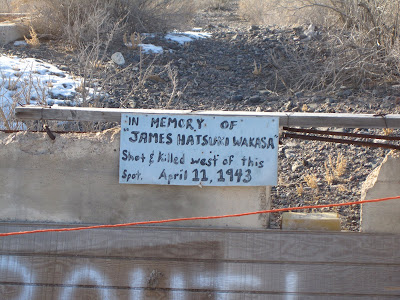 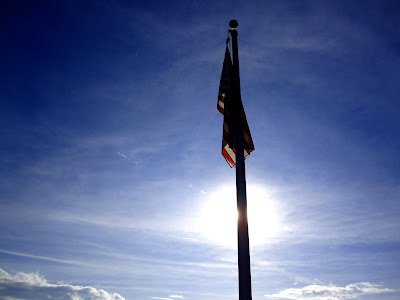 Topaz was a long way from the town of Delta, through a gridwork of roads playing home to cluttered farms and fields of sagebrush. There's a post-apocalyptic feel to the place. Everything is feels recently abandoned, and even though there is evidence of mankind everywhere you can't help but feel isolated. To see what I mean, look at this house. 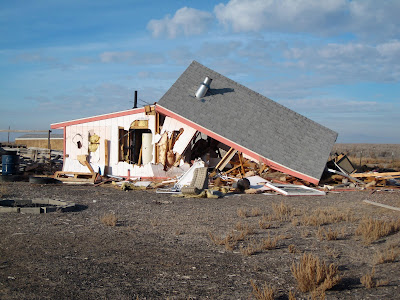 It just tipped right over! Why did it tip over? Why was it there in the first place? Why did the owner leave a perfectly good case of tampons and plastic cups sitting inside? 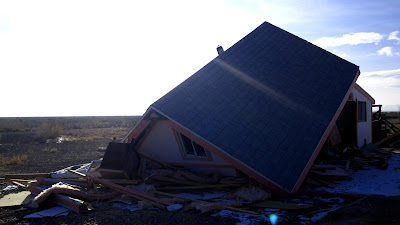 It feels like something out of Cormac McCarthy's the Road. Everything out there does. I wonder how long that tipped over house will be there. In fifty, a hundred years, will it have been cleared to make way for bright new houses and man-made lakes? Or will it's decay continue unchecked, a forgotten relic of a forgotten person, reclaimed by nature, as it will reclaim us all? Ah I'm freaking myself out.

Shortly after examining the house, we discover the fate of its owner. Quicksand. 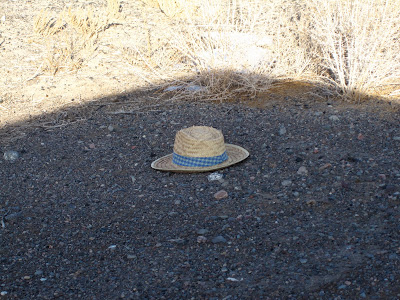 It was time to go home, but one perilous obstacle stood between us and the highway. Desert Pirates! 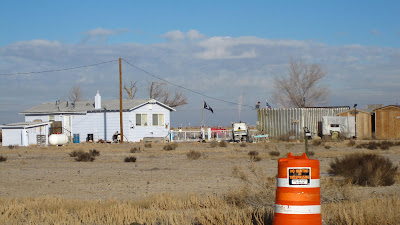 These people were very clear about us keeping out of their stuff. They do not suffer trespassers lightly! And they fly the Jolly Roger so who knows what they're up to? Again, the questions plague me: why are those people out there? What are they hiding? Why are they so suspicious of me and my doubloons?

Well the good news we made it through sans incident. 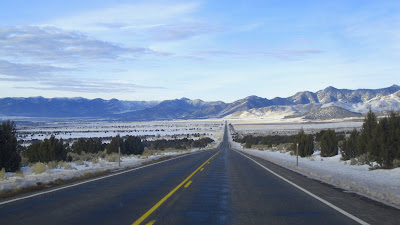 When we got back to civilization Elin and I celebrated with some snacks. I had a Charleston Chew. I'm not sure what she had.
Posted by B. at 6:11 PM 7 comments: