going to places, looking at things

Well, it's been a month, guess it's time to blog again.

So, I'm 30 now. Which is really no big deal and in fact anyone reading this born before May 27, 1980 has already achieved this milestone. But I want you all to be aware of this because it seems important.

Funny thing is, I thought I was above all of the angst of getting older, but turns out I'm not. I will never be referred to as a wunderkind or boy genius, but on the other hand it's nice to get it over with. I guess.

I said it elsewhere, but really my greatest accomplishment in life is amassing some pretty great friends. For my birthday I was lucky to be surrounded by almost all my closest chums, my inner circle, my loyal cadre. We went to the Bees game which as you know if you've ever so much as glanced at this blog is one the best things to do.

Look at all these tickets! 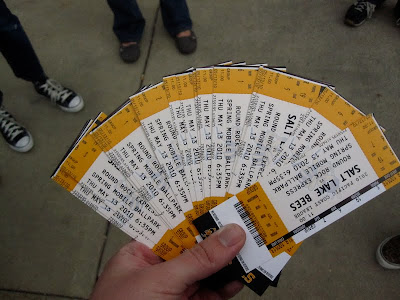 The weather was threatening to destroy everything but luckily the rain clouds cleared out in time and made for an amazing twilight. 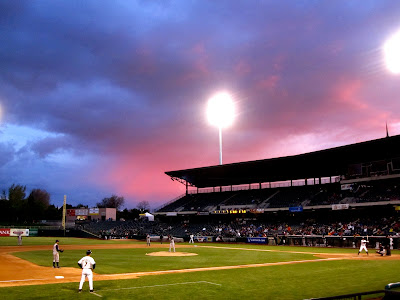 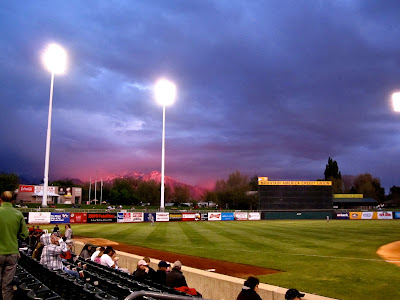 The game came down to the last at bat but the Bees lost. I think it would have been a nice gesture for 2002 Pacific Coast League MVP Robb Quinlan to just hit a home run in the bottom of the 9th. It was my birthday after all. I guess the loyalty between B. and Bees doesn't go both ways. Jerks.

This classic Classic Cleaners sign has shown up on the blog before but here's a fresh picture. Oh man that sign looks so good! 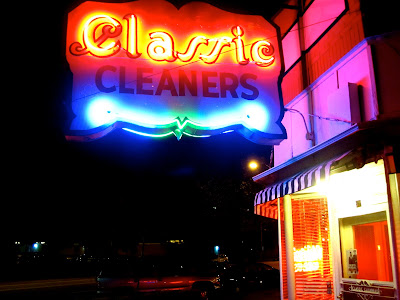 Back in September of 2009 three of the best bands Scotland has to offer (We Were Promised Jetpacks, Twilight Sad, and Frightened Rabbit) played a show at Urban Lounge. It was my generations Woodstock '94. All three of those acts have been back since then playing individual shows and though I love them all, the Twilight Sad show on May 14 made the rest of them look like ... lesser... acts. 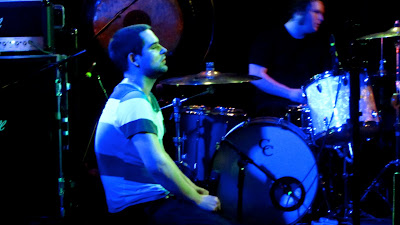 Twilight Sad isn't exactly accessible. On first listen their music sounds like a wall of noise, swirling ethereal guitars underneath weird, scary lyrics. I think you need to be familiar with their music before seeing them live so you can pick out the melodies hidden within the maelstrom, and hear the power and emotion they add to their songs on stage. 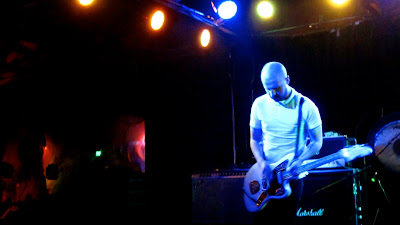 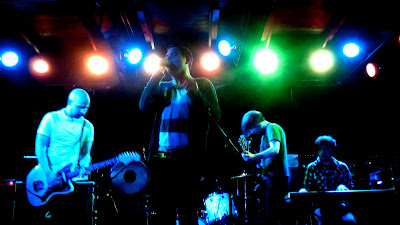 That Saturday I went to a wedding and, as usual, upstaged the bride. 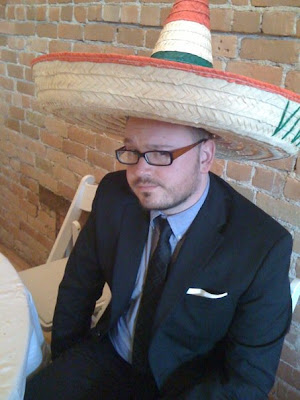 Sunday. Long drive, for this: 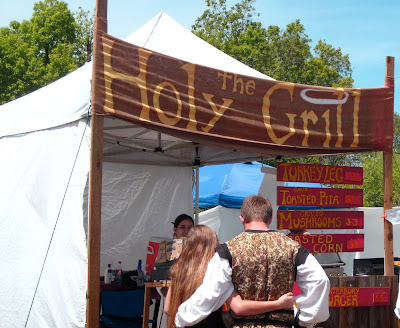 This looks an awful lot like a Renaissance Faire, right?

The Utah Ren Faire took over a farm or field or fairgrounds or something up near Ogden. There was a lot going on there. I thought this looked cool. 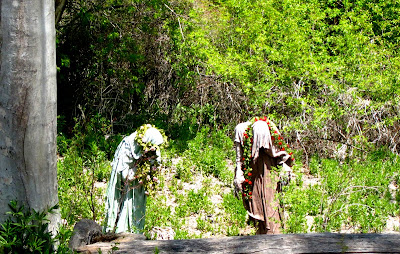 Ever been to a Ren Faire? Literally everything there is called "Ye Old." 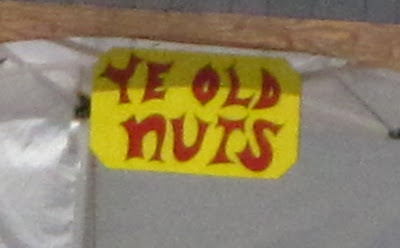 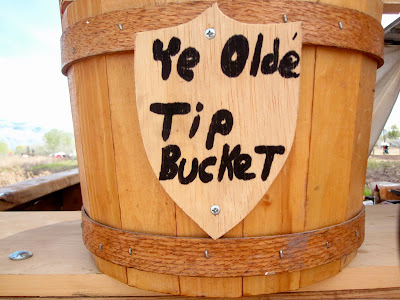 There were knights there (though not true, landed knights. Merely sell swords and free riders) doing melon slicing demonstrations and telling bad jokes in half-assed accents. 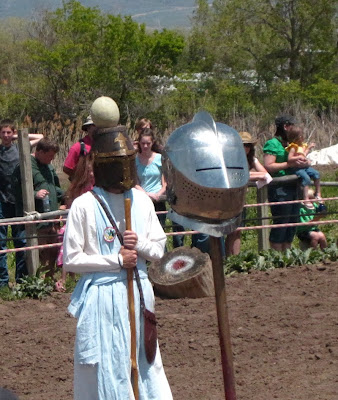 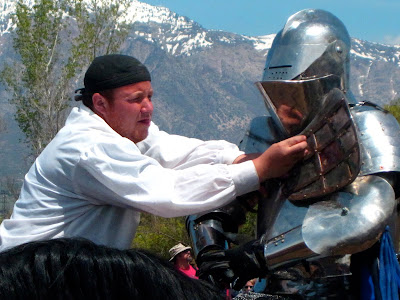 They also did a joust competition. Turns out there's a guy who's deal is that he's the world jousting champion. So that's a thing. 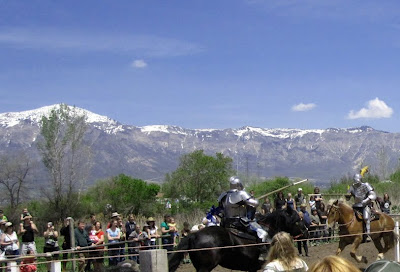 The jousting was kind of weak. No one was killed or even unhorsed. The lances are tipped with crumbly balsa wood so it wasn't as exciting as I'd hoped. 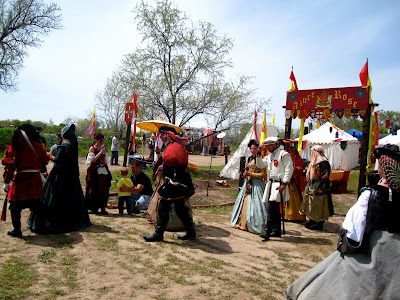 I don't know what the story is with these fancy people, but here's a fire eater. 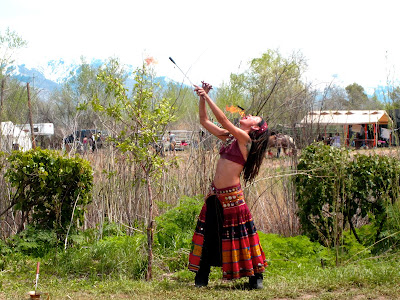 Alright, here's the problem with the Renaissance Faire: it wasn't particularly "fun" or "awesome." But it also wasn't quite ridiculous enough to be enjoyed ironically either. I consider myself a Sincerest more than an Ironist, but I do get a kick out of ridiculocity as well. All I got from this was a sunburn atop my newly-shorn dome. Should have worn a hat. 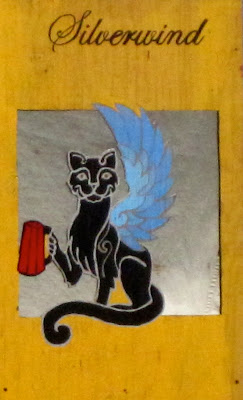 You know, Martin Scorsese directed his first movie at age 30. I'm expecting big things from myself this year. Long weekend coming up. Maybe I'll finish up my novel. The prologue is done, so things are really rolling now.